One With the Game: Virtual Reality and Us

The following article was written by Jonathan Rumore, a college student who was part of a team I led to learn about new developments in consumer VR systems

There’s a sort of commonality that play brings to a discussion. From the earliest ‘hit a ball with your foot’ to today’s most demanding video games; there’s a joyous and guttural feeling of ‘Oh! I know that thing!’ when you talk about these shared, social experiences. Virtual Reality is that next ‘thing,’ if it pans out. In this article, I’ll explain why. 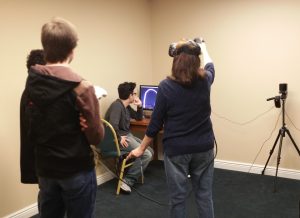 When I got the opportunity to work with Michael Greene on testing out his newly acquired HTC Vive VR headset, I chomped at the bit. I had hoped to try a PlayStation VR unit, but I have not yet had the chance. All of that excitement notwithstanding, I should probably say upfront that I had higher expectations for the Vive than I probably should have, leading to an ultimately disappointing experience in the end.

The amount of things that have to be plugged in (the wires are everywhere) with the Vive, could easily turn off elderly or tech-averse consumers. Not only that, you need a very high end computer to run it. A vast majority of consumers do not have the means or desire to buy or build a computer for something in the neighborhood of $2000. Nevertheless, I remain extremely hopeful that future iterations of VR headsets may prove to be more practical. However ,that being said, even though new programs for the Vive come out continuously, quality software can be hard to find. Michael and I, along with three fellow college students, went about testing his new VR setup with the goal of figuring out these assorted problems (cost, space and software) together. Two members of our group, Nick and Andrew, actually recommended parts and built a gaming-spec computer to run the Vive’s (rather demanding) hardware. Evan and I were unable to join in that phase due to being near the end of our college semester, however we helped with software testing and device setup.

Over the course of two Saturdays, we had roughly 20 people demo the device. It was a diverse group – ranging in age from just 10 years old to 65 years young. I set about to interview these varied individuals immediately after they had taken their turn, in order to gain a small slice of insight into what different people think about the technology and its use.

Many of the people who used the Vive were not gamers, nor were they too well versed in technology in general. One person I interviewed, Pat, said that she had watched her kids play games, and could “throw a gnome in [a Harry Potter game].” Two of the testers, Erin and Olivia, were very into video games, and understood the logic for controlling the system. Olivia showed others around a game in which you played as an adventurer. It was interesting seeing her wave around the controllers almost like a Wiimote, much like I did, since that was the closest thing to the Vive controllers available previously.

The most interesting interview I did, though, was with my own father. My father seems to actively go out of his way to avoid technology newer than the 8-track cassette or LaserDisc. Even though he has his own business, he doesn’t use a computer system for billing or setting appointments. He still owns a slider phone; what more can I say?

After spending some time flying around Google Earth, my dad was undoubtedly quite intrigued by the experience, even though he complained about the limitations of the myriad wires (all of a sudden my dad needs wireless technology?!) One thing that stood out to me was when my dad compared it to the Starship Enterprise’s Holodeck. Huh, even my Luddite dad saw the potential that Virtual Reality shows. That’s what excites me most.

This entry was posted in Technology. Bookmark the permalink.