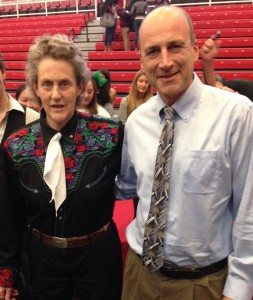 Last week, I had opportunity to hear Temple Grandin author of a number of books including the national bestsellers Thinking in Pictures and Animals in Translation. She is widely acclaimed for her contributions to the field of animal science and in helping the general public better understand autism. With the exception of Sheldon Cooper, the fictional lead in the Big Bang Theory, Temple Grandin is probably the world’s best known autistic person.

I’m familiar with some of her work but have never seen her present and found the talk quite thought provoking. She described the state of autism research and shared anecdotes from her own life experience. In explaining how she was able to succeed in spite of, or perhaps because of her ability to “Think Different,” Grandin helps reframe the way we view people on the autism spectrum and in fact, people in general.

Grandin compares personality traits to a sound mixing board with its multiple faders, each set to its own level. Within some range of variations we each have a unique mixture of tendencies, inclinations and approaches through which we understand and react to the world. Autistic individuals display a more extreme version of certain traits. Displaying photos of Albert Einstein and Steve Jobs, she posits if they were children today, these two iconic figures might be considered on the spectrum due to significant gaps in their understanding and observance of social mores and appropriateness. They also represent vastly different thinking types, Einstein the mathematician, Jobs a visual thinker, two of the more common types of autistic brains. Grandin relates that she is a very pronounced visual thinker and was able to build upon this talent to create a career marked with notable contributions to her field.

Building upon strengths is one of Grandin’s main themes. She notes the importance of allowing children to discover what they are interested in and then helping them expand upon it. A child who loves Legos should fully and frequently play with them but as time moves on, he/she should be encouraged to expand towards related skills and creative endeavors. This is a challenge with any child, particularly those on the spectrum who easily get locked into familiarity and routines, however, it is a key point for their growth. Beyond building upon the child’s areas of interest Grandin feels that “stretching these kids,” is absolutely vital. Recounting her own experience of her parents insisting that she shake hands and serve hor d’oeuvres to guests at family gatherings, she learned to appropriately interact with people and perform expected social duties. This prepared her with some of the social skills needed to succeed in business situations as a young adult.

I had the opportunity to speak with Dr. Grandin directly after her presentation and commented on her suggestions to involve your child with people in the broader community in natural and productive ways which I have written about in previous posts and for parent resource materials (see “using your natural resources to help your child with social challenges”). She fully agreed and we discussed the general idea as well as some of the methods one might employ. Of course the challenge for parents is to develop an individualized approach that taps into the “natural resources” at their disposal to best impact their child.

This entry was posted in Autism, Parenting. Bookmark the permalink.